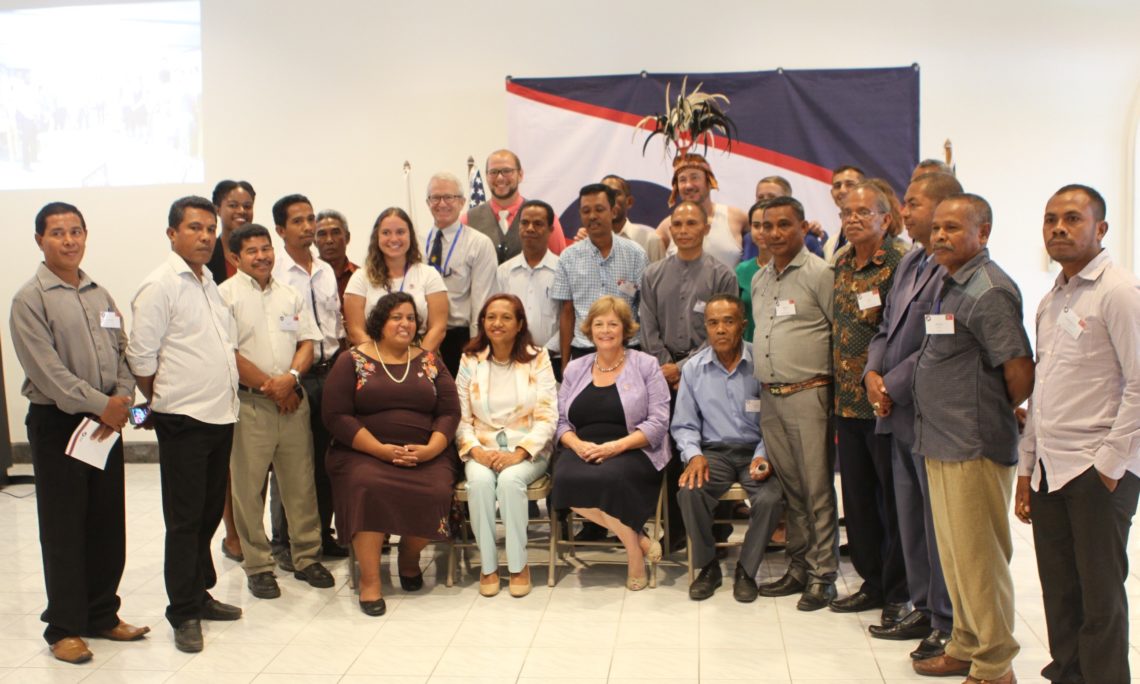 Minister of Education, Youth and Sports Dulce de Jesus Soares joined U.S. Ambassador Kathleen M. Fitzpatrick for a Peace Corps swearing-in ceremony at the U.S. Embassy on December 13, 2018.  A group of 27 American citizens took the oath of service to become the fourth group of Peace Corps Volunteers to serve in Timor-Leste since the program reopened in 2015.  For the first time in the program’s history in Timor-Leste, the group includes Education Volunteers who will co-teach English with Timorese teachers in third cycle and secondary schools.  Along with the Education Volunteers, Peace Corps Timor-Leste has Community Economic Development Volunteers assisting women’s groups, youth groups, and community leaders.

“These diverse and talented Americans reflect the very highest ideals of the United States,” said Ambassador Fitzpatrick before delivering the oath of service.  “As Peace Corps Volunteers, they contribute to the strong friendship between the United States and Timor-Leste.”

Minister Soares – who played a vital role in the development of Peace Corps in Timor-Leste and the addition of the Education Volunteers – encouraged the Timorese counterparts to work together and support all Peace Corps volunteers so that they could achieve their shared goals.

Kavita Pullapilly, Director of the Peace Corps in Timor-Leste, applauded the work that the volunteers and their Timorese colleagues will accomplish over the next two years.  “Volunteers and Timorese community members, you are embarking on an incredible journey together, one of friendship, trust, learning, personal and professional growth.  You will share with each other your hopes for the future.  You will learn about and develop a respect for each other’s cultures. You will each contribute to the fabric of the Peace Corps legacy,” said Pullapilly.

The group arrived in Dili on October 6, 2018 and immediately began ten weeks of intensive Tetum language, cultural, and technical training.  They will leave Dili this week with their Timorese counterparts to their new communities in Liquica, Ermera, Aileu, Ainaro, Baucau, Bobonaro and Manufahi.

More than 170 Americans have served as Peace Corps Volunteers in Timor-Leste since 2002.  Volunteers live with local families and work in rural communities for two years.  More information about Peace Corps Timor-Leste is available on its website and Facebook page.