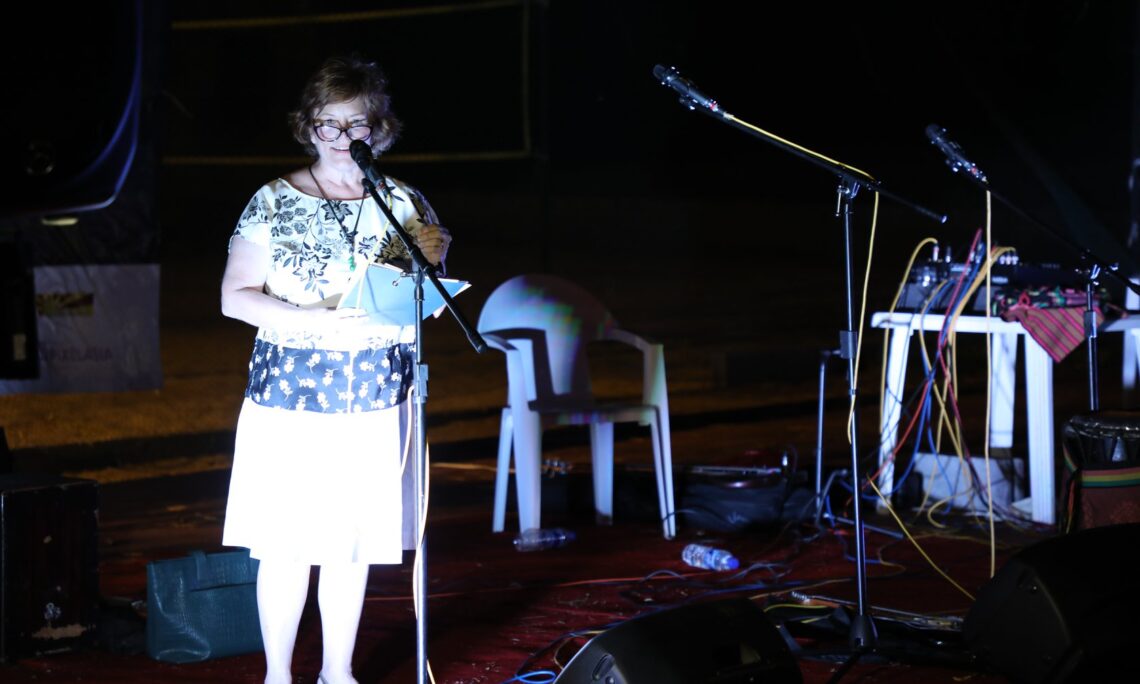 Good evening everyone. It is a pleasure to be here tonight together with all of you to once again celebrate the Dili International Film Festival.

It is very gratifying that we are able to come together for an event like this during these difficult times. Thank you to His Excellency Dr. Ramos Horta for his strong support for the arts, including film, in Timor-Leste.

In fact, film – several featuring Dr. Horta himself – or actors portraying him – has had an important role in telling the world the truth about Timor-Leste’s struggle during the occupation and its fight for independence and democracy.   Last year we met the distinguished director of Balibo,.

In fact, last year’s film festival was enlightening, encouraging and enthusiastic. It hardly seems that a year has gone by already – what a challenging year it has been throughout the world.

But the arts live on, including film, in very innovative ways. I’d like to take this opportunity to express appreciation for the actors, dancers, writers, film makers, theater production experts and even TV comedians who have found ways to continue to provide access to their arts during the COVID-19 pandemic, even if remotely.

Our spirits need the arts to inspire us and remind us of our common humanity.

This year, the U.S. Embassy is again proud to actively support the festival. We have provided a small grant, films from the American Film Showcase and once again are bringing the participation of dedicated American film makers, who will engage in virtual workshops with young Timorese filmmakers.

Also, this year we worked with Lena Lenzen and DIFF to bring very unique American films to the festival, and had them subtitled into Tetum for local audiences.

For example, during the week the festival will show the U.S. Netflix film called Mercury 13. This film tells the inspiring story of a group of women in the 1960s who trained to be the first female astronauts and paved the way for many female astronauts to follow. This group of female pilots proved that they had the physical and mental capabilities to qualify to be elite NASA astronauts, just as much as any man.

We will also see a film, called Personal Statement, which tells the story of three high school students from challenging backgrounds in New York. In the film, we see these students struggle to gain acceptance into university-a very competitive process in the U.S. And then they give back to their community by inspiring their classmates to go to university as well. This film is especially timely as students and educators around the world are still adapting to the impacts that the COVID-19 pandemic has had on education.

One of my favorite highlights from last year was the DIFF Female Filmmakers Camp. Our Embassy provided funding and brought two renowned American Filmmakers to lead that camp. They helped guide young Timorese women on the path towards using film to tell their stories and develop their careers.

I am very proud that we are able to support a similar program this year. One of the filmmakers from last year, Mana Dawn Valadez, was so enamored with Timor-Leste that she will again join the program along with another filmmaker, Shana Hagan. They will hold virtual workshops during the week with young Timorese filmmakers. They will share best practices on everything from practical filmmaking tips to using film to make change in their communities.

Filmmaking is such a powerful tool and easier than ever to do with today’s technology. Film shows helps us see through the eyes and experiences of others. We learn about worlds we never knew existed or confront painful truths in the life and world we know in our own lives.

In free societies, film and theater – the arts – often help us see the uncomfortable truths our societies and leaders want to ignore and often point the way to identifying and addressing problems. That is why the U.S. Embassy in Timor-Leste supports this film festival and why our American film envoys are eager to engage with you.

I hope you all are inspired by these films and the workshops throughout this week. I would like to thank Lena Lenzen and her team from DIFF for all of their hard work. Congratulations and see you all at the movies!