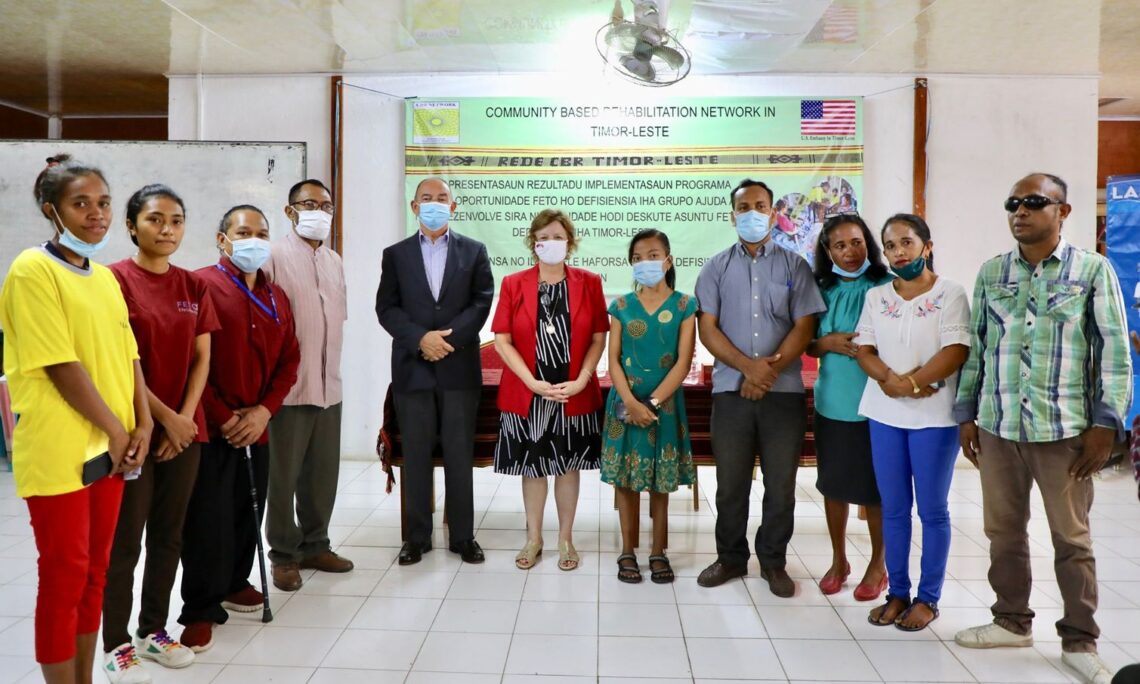 My respects to the Director of Community Based Rehabilitation Network -Timor-Leste (CBRN-TL), the NGO Forum representative, the Country Leader of TLM-TL, and all participants and guests.

It is my honor to be here today at the final report presentation of CBRN-TL’s program “Expanding Opportunities and Leadership Skills for Women with Disabilities in Self-Help Groups through Skills Development.” The program took place in Dili and Covalima. I am proud to say this program was funded by the U.S. Ambassador’s Small Grants Fund in 2019.

Through the grant, the American people supported CBRN-TL to reach over 100 women with disabilities and leprosy to achieve three goals. First, to develop their capacity. Second, to strengthen their leadership skills. And third, to build their confidence to effectively participate in decision-making within their Self-Help groups and communities.

The program also reached over 600 Timorese through radio and television programs.

It is critical that women with disabilities and leprosy actively participate in decision-making in their communities. Their perspectives and experiences need to be integrated to create an open and inclusive community.

On July 26, the United States celebrated the 30th anniversary of the American with Disabilities Act. This important civil rights law prohibits discrimination based on disability and guarantees that people with disabilities have the same opportunities to participate in American life.

Furthermore, this month – October – is National Disability Employment Awareness Month. And on December 3, we will celebrate the International Day of Persons with Disabilities.

I share these three events because I want you to know that the voices of people with disabilities are being heard. Not just in Timor-Leste, not just in the United States, but around the world.

There continues to be growing awareness about the need for communities and governments to be inclusive and to effectively respond to the needs of all citizens. One of America’s most respected disabilities rights activist explains it this way: We need involvement in decision-making so that there is “Nothing about us without us.”

CBRN-TL’s program plays this important role. The leaders developed s through the Self-Help groups have been able to use their roles to advocate for disability rights. They also advocate for prevention of COVID-19, and the participation of persons with disabilities and leprosy in the development of their villages.

To know that CBRN-TL and other civil society organizations can have such an impact to improve the lives of community members through the U.S. Ambassador’s Small Grant Fund brings such joy to the work we do at the U.S. Embassy. Supporting human rights, advancing civil society, and building people-to-people ties are among the most important work we do.

The U.S. Embassy is proud to partner with Community Based Rehabilitation Network – Timor-Leste to help improve the lives of people with disabilities in Timor-Leste.

On behalf of the American people, I want to congratulate CBRN-TL on the successful completion of its program. Thank you very much.