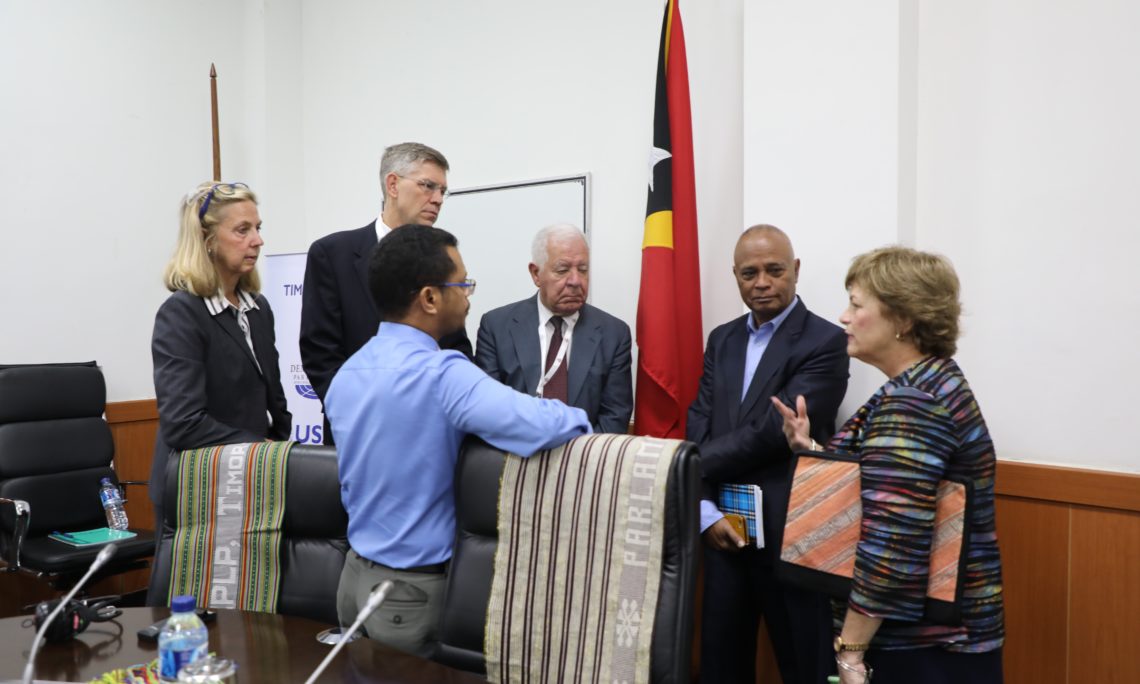 First, I would like to congratulate the President of National Parliament on his birthday!

I am pleased to join you all here today to officially open this technical assistance workshop as part of the House Democracy Partnership. I would like to give thanks to the International Republican Institute for organizing the workshop, and thank the U.S. delegation for their visit.

This marks the fifth time since 2009 that leaders and experts from the United States are visiting Timor-Leste through the HDP.  It is one of several efforts that demonstrate a strong, enduring, and mutually beneficial friendship between the American and Timorese people. Working together with partners at the National Democratic Institute and USAID, IRI develops various parliamentary leadership development activities through the HDP.

I would also like to congratulate Timor-Leste on the celebration of the 20th Anniversary of the Popular Consultation.  Timor-Leste has just been independent for 17 years but it has made tremendous progresses in its democracy, with free and fair elections and a well-functioning parliament.  Today we would like share expertise and experience with all of you; however, we are aware that there are so many things for us to also learn from Timor-Leste.  Therefore, I encourage you to use this as an opportunity for a two-way exchange, where the U.S. delegation can share experiences and lessons learned from the U.S. Congress, and you can share progress and insights from the National Parliament.

The HDP is a great example of how the U.S. Government utilizes a wide variety of resources in a concerted effort to achieve shared goals. And yet, it is just one of many ways that we work together to help strengthen democratic processes in Timor-Leste.  In recent years, USAID has strengthened the country’s political parties, trained election officials and domestic observers, supported international observers, and expanded access to civic education.  Additionally, USAID works closely with the Customs Office to improve efficiency and transparency so that exporters and importers have confidence in its operations, ultimately bolstering trade and economic growth.  The U.S. Government, represented by USAID, recently signed an amendment to its Development Objective Agreement (DOAG) with the Government of Timor-Leste to commit an additional $16.85 million from the United States to Timor-Leste’s development.  These and other efforts show that the United States is deeply invested in Timor-Leste.  In fact, Timor-Leste is an important part of our strategic vision for the region.  Our vision is a free and open Indo-Pacific in which all nations are self-governing, economic growth is private sector-led, and good governance protects human rights and ensures that economies are open, transparent, and rules-based.

In closing, I would like to again express my sincere appreciation to all of the people involved with the HDP.  I am sure that this workshop will be beneficial for us all and I look forward to seeing the positive outcomes of this remarkable effort.

Thank you very much.