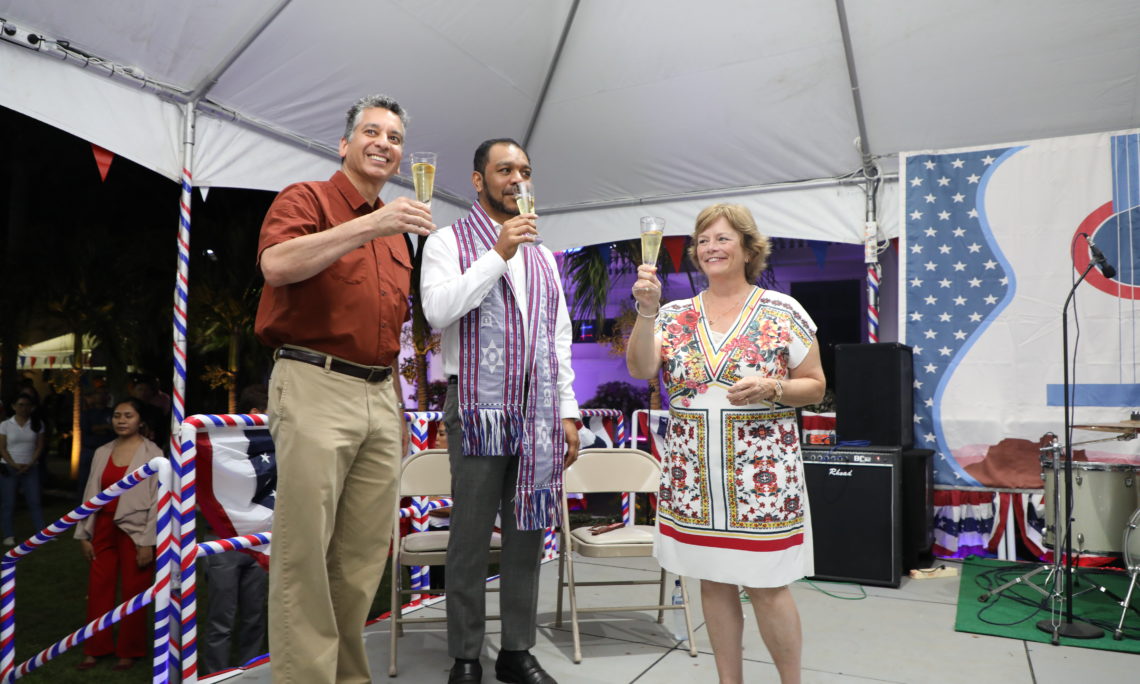 Thank you to our guest of honor, His Excellency Fidelis Leite Magalhaes, Minister of Legislative Reform and Parliamentary Affairs.

Our respects to members of the Timor-Leste government, the diplomatic corps, civil society members, and distinguished guests.

Before I start, I’d like to introduce our new US Embassy Deputy Chief of Mission, Elias Parra.  I know you will give him a warm welcome.

Welcome to this commemoration of America’s Independence Day.  Tonight we are celebrating American music, and you can see several beautiful examples of how Timorese and Americans share a love of music.  You just heard our national anthem, the Star Spangled Banner, sung by Natalino de Jesus Soares, a Timorese student on a U.S. exchange program to West Virginia University.  Natto won a competition at his university for singing our national anthem!  Thank you very much for that great performance.Our American music is being performed tonight by the wonderful Timorese singer Cidelia and her band.  Thank you, Cidelia! And our UmaAmérika volunteers have created beautiful portraits of American musicians.  Take a look to see how these creative young people are celebrating the connection between our two countries.

Tonight we’d also like to recognize several momentous anniversaries this year. Today we mark America’s 243rd birthday: the anniversary of the signing of the Declaration of Independence. The ideals about liberty, freedom, and rights for all that Thomas Jefferson wrote into the Declaration of Independence became a guiding light for our country, and for many people around the world. In July, we celebrate another momentous anniversary for all humankind—  50 years ago, an American named Neil Armstrong was the first person to land on the moon.   When he stepped on the surface of the moon, Armstrong declared that his step was “one small step for man and one giant leap for mankind.” These words still ring across boundaries and nations, an example of the universal human capacity for hope and progress. Timor-Leste is celebrating its own momentous anniversaries this year.  20 years ago, In August Timorese voted for independence in the Popular Referendum. This was a historic milestone in a long, hard, and ultimately successful struggle.

The U.S. Embassy here also represents many other U.S. agencies that are part of this work: USAID has been here 25 years—even longer than this Embassy.  USAID began by working through the Cooperativo Café Timor, and now works to support Timor-Leste’s development in a wide variety of ways. Tonight, here at this event, please visit the USAID tent and try some Californian strawberries grown right here in Timor-Leste, part of our USAID agriculture project partnering with local farmers. At the US Embassy, the Millennium Challenge Corporation, the Department of Justice, and the Department of Defense are also active partners, working with Timorese counterparts toward a shared hopeful vision of the future. This very celebration also marks the first anniversary of YSEALI – the Young South East Asian Leaders Initiative – in Timor-Leste!   We now have about 1000 YSEALI members.  I’m so inspired by the Timorese youth who have blossomed as young leaders in this program. I want to mention one more anniversary, returning to our theme of music.    This year is the 80th anniversary of the iconic American film called “The Wizard of Oz.”  That movie introduced one of the most beloved American songs, “Somewhere Over the Rainbow.” Sung by a poor, orphaned girl from Kansas, the song is about longing for a place where “dreams really do come true.”

Today, Timor-Leste and America are united in this: we have a dream that really can come true.  We have a dream of a democratic nation, one that respects human rights and the rule of law. Sometimes we take small steps to achieve those dreams; sometimes giant leaps. Our countries show that this dream is not for “somewhere over the rainbow,” but for us, right here in Timor-Leste and back in my home, the United States of America.

Thank you Minister Fidelis and thank you to everyone who joined us for this iconic American celebration.