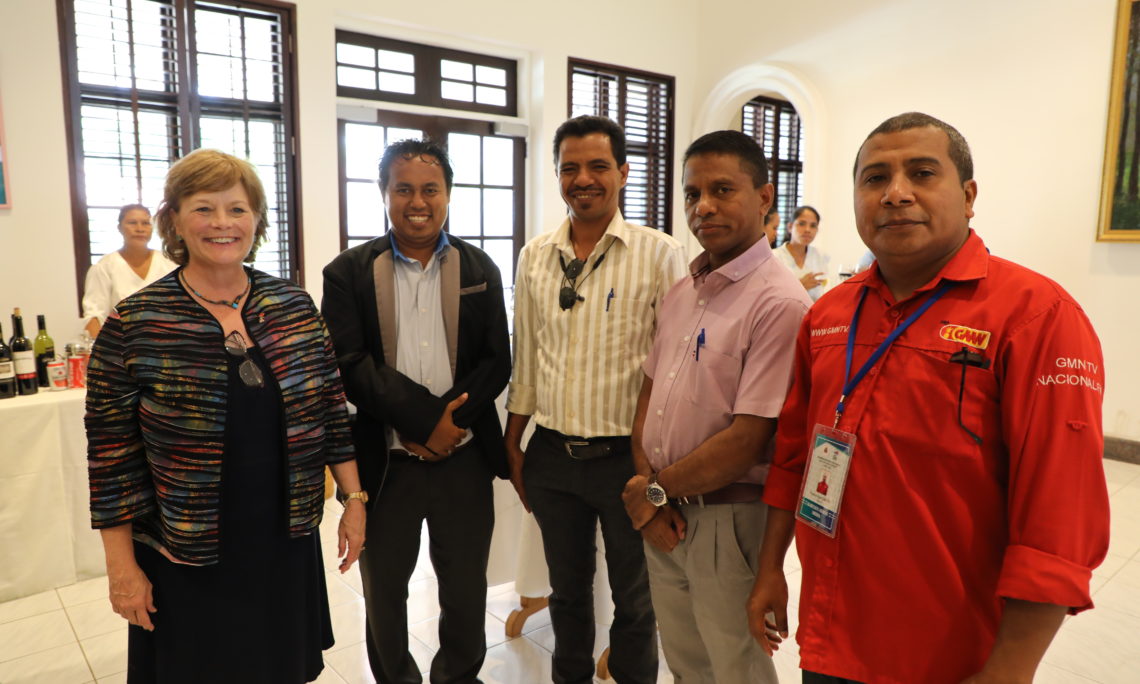 I am honored to be in Timor-Leste as you commemorate the 20th anniversary of the referendum. And today, I am pleased to introduce Assistant Secretary Stilwell. Assistant Secretary Stilwell leads on diplomatic policy and operations in the East Asia and Pacific region. He joined the Department of State after serving in the Airforce for 35 years. He has served the United States as a linguist, fighter pilot, commander, and scholar. He was awarded the Department of Defense Superior Service Award in 2015.

I know I speak for both of us when I say that the United States greatly admires the Timorese people for their courageous struggle for independence. We are also proud of the Americans who were here alongside them, educating voters, observing the referendum, providing humanitarian relief, and rebuilding schools and clinics.  They courageously held their ground alongside Timorese in the face of intimidation and threats of violence. Today I want to share a story of one of those Americans who was here in Dili 20 years ago. Some of you are probably familiar with journalist Marie Colvin.  She was a war reporter who wrote for the London Sunday Times.  She was killed by the Syrian regime in 2012 for her coverag of the siege of Homs in Syria.

Marie Colvin wanted to show how terrible the consequences of war are for everyday people.  She said, “Covering a war means going into places torn by chaos, destruction, death and pain, and trying to bear witness to that. I care about the experience of those most directly affected by war, those asked to fight and those who are just trying to survive.” When Colvin arrived in Dili in September 1999, only 26 journalists remained in Timor-Leste. Because the streets were so dangerous, they were housed in the UNAMET compound along with other foreigners and Timorese refugees. The UN compound held nearly 2,000 people—and there was only one road out.Supplies were quickly depleted, and the situation was becoming untenable.  The UN announced that they would evacuate their staff. Most of the foreign journalists chose to leave—but not Marie Colvin.  Her colleagues report that she shrugged and said, “Forget it, I’m not leaving. This is the biggest story in the world.” Everyone in the compound knew that a UN evacuation would put their lives in grave danger.  Colvin even called her sister to say goodbye. She said later, “I just couldn’t leave. We’d been living with these people for four or five days, sleeping next to them, getting rice from them… It was morally wrong, the idea that we would walk out, say good-bye and all those people knew they were going to be killed. It was not a decision I could have made the other way.” Marie Colvin called her editor to say she was staying behind.  Only two other journalists, both women, remained: Minka Nijhuis and Irena Cristalis. The situation was desperate, but Colvin remained courageous and professional. In her reporting, she described the siege on the camp and the coordinated attacks of the militias and army. These eye-witness accounts put enormous pressure on the international community. After four tense days under siege, the refugees were evacuated. Colvin remembered with pride, “I embarrassed the decision-makers and that felt good because it saved lives.”  And Prime Minister Xanana Gusmao said, upon Colvin’s death, “Our sister, Marie Colvin, showed great courage in her work and a deep humanity in the face of violence and hatred. We will always remember her willingness to sacrifice her own life to protect those 1,500 Timorese.”

Journalism is not always this dramatic.  But it is always important. Marie Colvin said it well: “Our mission is to speak the truth to power. We send home that first rough draft of history.” Good journalism gives people the information they need to make good decisions and hold their leaders accountable—which means they can work more effectively for justice and human rights and be better represented by their government. This is why free, independent journalism is a pillar of democracy, and why the United States is proud to support journalists around the world.

Here in Timor-Leste we have seen a profound respect for all the journalists who told your story and alerted the world to Timor-Leste’s courage and suffering during the Resistance.  We are very pleased to hear that Marie Colvin will be honored by the Timorese Government with an award for her bravery. The U.S. Embassy strives to honor and emulate those journalists’ commitment to this country.  In that spirit, we support journalism in Timor-Leste through our KLABIS journalist roundtables.  We have many programs that focus on English language acquisition and English teaching skills.  We’ve also supported professional training for community radio. And today we are launching a new initiative: The Marie Colvin English Journalism Memorial Scholarship. This scholarship will provide 6 Timorese journalists one full year of English language training.  English skills will give them access to a wide variety of sources and equip them to bring new information to their Timorese audience.  We intend to continue this program for years to come. We hope that the recipients of this scholarship are inspired by the bravery and professionalism of Marie Colvin, and that they, like her, make the most of every opportunity to speak truth to power.

Thank you again for coming today, I would like to invite Assistant Secretary of State for East Asian and Pacific Affairs, David Stilwell, to join me in presenting the scholarship certificates to the recipients. Our Public Affairs Officer Caleb Portnoy will call up the scholarship recipients…

Congratulations everyone. And now I would like to invite the Secretary of State for Social Communication to give a few remarks.