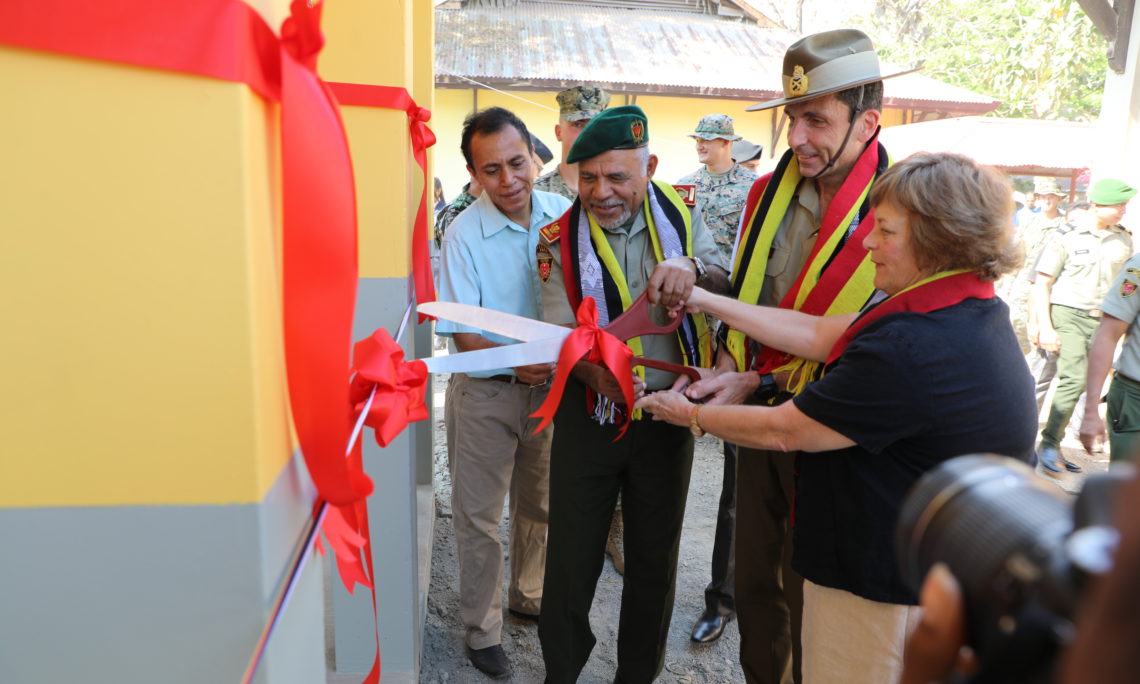 Good morning. My respects to:

1) Major General Lere, Chief of Defense for the F-FDTL

Good morning.  I am happy to be here with all of you today to celebrate the construction of the new restroom facility at the Becora School of Hospitality and Tourism. I would like to thank the U.S. Seabees, the U.S. Marines, the Australian Defense Force, and the F-FDTL, and the Ministry of Education for their collaboration in this effort. A few weeks ago, we brought a very senior official visiting from the United States ministry of foreign affairs here to see the project as it was under construction.   That visitor was here to celebrate the 20th anniversary of the Popular Referendum.  He was very impressed with the work here and even tweeted about it to our Indo-Pacific Command. Congratulations to all of you.  Your team worked as an integrated crew and with a very tight schedule, and still built a brand-new restroom facility from the ground up.  This new facility will directly impact the school’s operations and provide a more safe and healthy educational experience for the 305 students.

Your Seabees predecessors completed the school room facility – and I was honored to be a part of that ceremony several months ago.  So the impact of your work continues to benefit this community. The facility here is one of many engineering projects completed during this year’s exercise called HARI’I HAMUTUK.  This annual exercise with the defense forces of the United States, Australia, Japan, and Timor-Leste represents the close friendship between our nations. This construction project, as well as projects completed in Metinaro, also demonstrate our strong support for the development of the F-FDTL’s engineering capabilities. In a few months, we will celebrate the completion of the 100th Seabee project and the 10-year anniversary of the Seabees in Timor-Leste.  The work of the Seabees and Marines are part of our broader support for Timor-Leste and works in concert with USAID, Peace Corps, and other U.S. Embassy programs.

We are proud that this ceremony coincides with the 20th anniversary of INTERFET.  The U.S. military played an important part in INTERFET and continues its work today in support of the Timorese people.

Congratulations to all of our partners and friends.  Thank you very much.