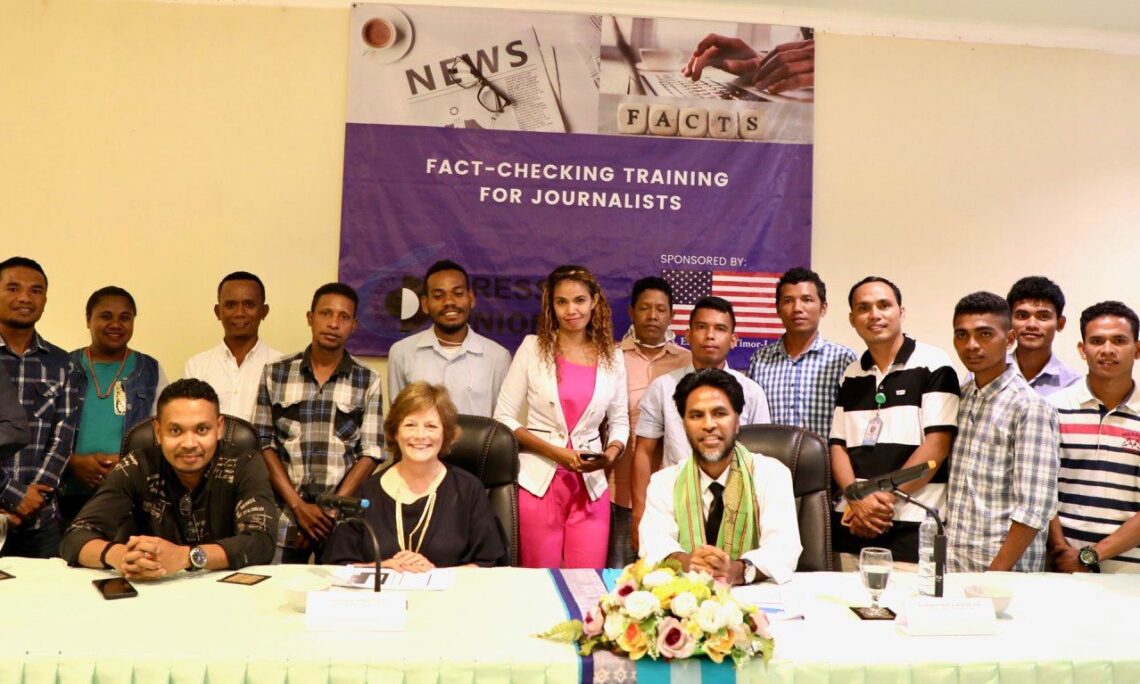 Good morning and thank you all for taking part in this very important program for journalists on basic online fact checking and verification.   The U.S. Embassy is proud to provide funding for this and other programs that support the development of Timor-Leste’s journalists. Thank you to the Timor-Leste Press Union for organizing this training, particularly Raimundus Oki and Timor-Leste Press Union Secretary General Horacio Babo. Also, I congratulate the students and journalists who are participating today in this training. My team and I at the U.S. Embassy in Timor-Leste have profound respect for journalists and the work that they do to inform citizens about events and issues that affect their lives, society, economy and government.  I would like to congratulate this group on your continued work to increase Timor-Leste’s internationally recognized World Press Freedom Index.

In a democratic society like Timor-Leste and the United States, journalists provide the insights citizens need to govern themselves and to vote for their interests.  During times of difficulty, such as COVID-19, you journalists even in free societies are on the front lines, taking risks every day. In societies that are not free, journalists risk their lives every day to tell the truth. That is why the US Embassy works so closely and diligently with our Timorese counterparts to address the challenges journalists face and advance the goals that both Americans and Timorese share.  We are working to strengthen the professionalism of journalists and their ability to check their stories and verify facts through various sources.   And we work every day around the world to ensure freedom of expression, which is the hallmark of democratic societies. Last week we inaugurated a workshop on countering “fake news.”  It is indeed important to be able to combat hoaxes and fake news through rigorous journalist standards before stories are posted are printed. It is equally important that journalists know the difference between fake news and news that is difficult or challenging to people. Sometimes the truth is difficult.

So this program is one of the many initiatives supported by the U.S. Embassy that builds the skills of local leaders like yourselves. This training recognizes that technological advancements have brought profound changes to the way we all work and live. We have access to more information than ever before, and information can spread around the world in an instant. The abundance of information available online has led to many improvements in people’s lives around the world. But we have also discovered that incorrect information can spread more quickly and more widely than ever before. Misinformation can create conflict, risk people’s health and destabilize democracies. In the United States and many other democratic countries we are particularly concerned about the evolving threat of state-sponsored malicious disinformation and interference in democratic processes. People in our democracies depend on fact-based journalism and accurate information to make decisions about their future through voting and other democratic mechanisms. This is a challenge that Americans and Timorese share, and that is why we are supporting programs that strengthen local defenders of both accurate information and press freedoms. The idea for this program began several years ago.  The US Embassy selected and sponsored Raimundus Oki take part in a Google News Lab program.

During the training he learned new techniques and technologies that are helping journalists around the world detect false information and verify correct information. U.S. companies like Google are working both in the United States and around the world to find solutions to the problem of misinformation and disinformation. Raimundus used this knowledge to develop this program today. It is important to note that the major technology companies developed in the United States, where we have strong legal protections of the freedom of speech and press. This value is an integral part of the internet and is essential for good journalism. To continue to protect freedom of speech and press and counter false information, we need strong journalists and educated populations. Research has shown that during times of uncertainty, people seek simple messages and often reject alternative perspectives that threaten their existing beliefs. Even after individuals have been informed and accept that a news story is not entirely truthful, one third will still share that story. That is why it is so important for journalists to verify information before it is published and maintain a strong code of ethics.

One of America’s most respected American journalists, Jim Lehrer, wrote a series of principles for journalism. For example, he said  “I am not in the entertainment business”. Jim realized the importance of journalism goes far beyond simple entertainment. In the United States, Timor-Leste and all democratic societies, journalists play an essential role. Good journalism gives people the information they need to make good decisions and hold their leaders accountable—which means they can work more effectively for justice and human rights and be better represented by their government. This is why free, independent journalism is a pillar of democracy, and why the United States is proud to support journalists around the world.

Here in Timor-Leste the U.S. Embassy strives to honor the journalists who told your story and alerted the world to Timor-Leste’s courage and suffering during the Resistance. In their spirit, we support journalism in Timor-Leste through a variety of journalism training programs such as this one today. We also support the development of English journalism skills through a scholarship in honor of Marie Colvin, the American reporter who remained in Timor-Leste in 1999 during an extremely dangerous time and got the message out to the international community. Journalism and our information environment has changed very much since Marie Colvin was in Timor-Leste. Digital and social media are great tools for freely sharing information. But we have all seen how quickly incorrect information can now spread and create conflict in our communities. The ability to seek and report trustworthy and fact-based journalism is more important than ever. We need strong journalists who can provide the public with accurate information and investigate issues that are important to the Timorese public.

I encourage you all to work diligently to find the truth through careful analysis and investigative reporting. A well-functioning democracy is dependent on your work in this regard and on training programs such as this. Thank you for the important and courageous role you as journalists play in Timor-Leste. It is a big and challenging responsibility, but so vital to this young, new democracy.