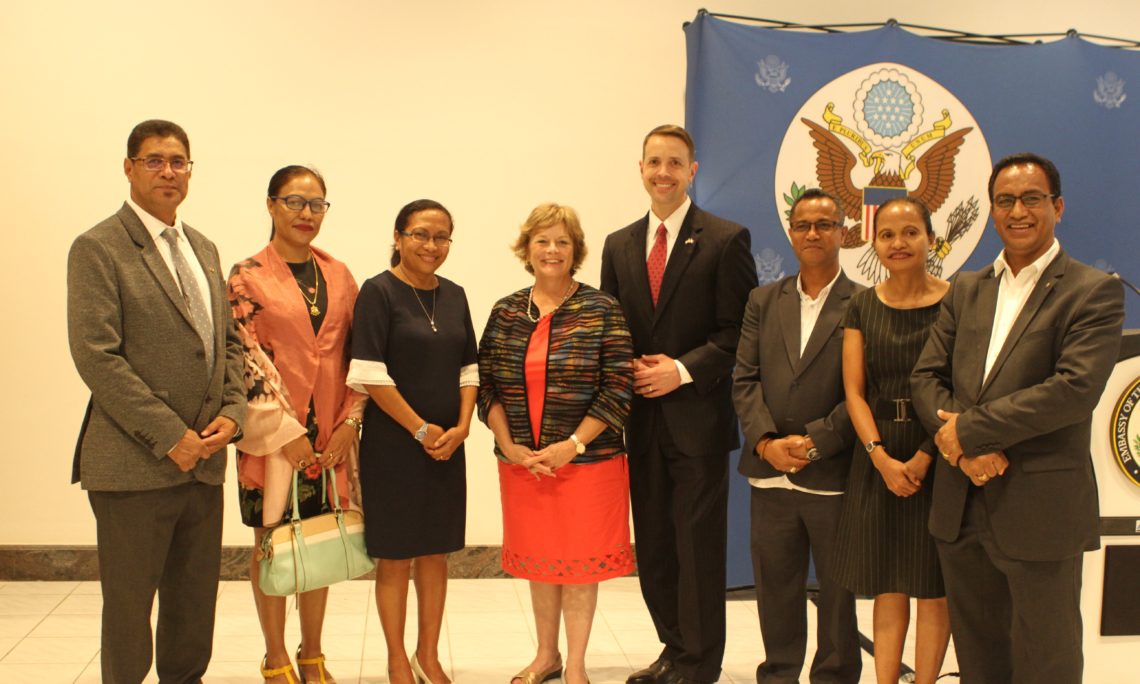 Good afternoon and welcome to this special reception for the U.S. Embassy’s new Resident Legal Advisor (RLA), David Lewen. I am pleased to introduce David to everyone here today.

I also want to acknowledge David’s wife, Julie Lewen, who is here with us today. They have two wonderful children – Madeline and David Paul – who are here in Timor-Leste, but they could not join us today because Mom and Dad wanted them to stay at school. David comes to us from the United States Attorney’s Office in the Eastern District of Tennessee, where he has served as a federal prosecutor for the last 11 years. He has lots of experience prosecuting federal cases. In fact, while accompanying David on many of his initial meetings in Timor-Leste, I’ve been amazed by stories about his previous work. With his wealth of knowledge and experience, you can see why we are excited to have David join our U.S. Embassy team as our Resident Legal Advisor. Since 2009, the U.S. Embassy – through the RLA program – has collaborated with the justice and law enforcement sectors of Timor-Leste with the shared goal of making the rule of law a reality for all Timorese citizens. It is another strong example of how the United States of America works with Timor-Leste as we both strengthen our democratic institutions and support the Timorese people.

The RLA program assigns experienced and knowledgeable assistant United States attorneys to United States Embassies around the world. RLAs come from the U.S. Department of Justice’s Office of Overseas Prosecutorial Development, Assistance and Training (OPDAT), funded by the U.S. Department of State’s Bureau of International Narcotics and Law Enforcement (INL). The RLA program focuses on supporting and enhancing the criminal justice sector of Timor-Leste, with a particular focus on the Court of Appeals, the Ministry of Justice, the Anti-Corruption Commission, and the Office of the Prosecutor General. The RLA also supports the work of the U.S. Embassy’s Regional Security Officer – Lech Kazmirski – who oversees a program of training and cooperation with the PNTL, PCIC and other law enforcement organizations.

Timor-Leste has established and built capacity in key justice institutions such as courts, prosecutors’ offices, public defenders, an Anti-Corruption Commission, and an Ombudsman for Human Rights and Justice. Recent years have brought important achievements in combating public corruption, money laundering, and domestic violence. The United States is proud to be a partner in the development of this vital sector. The RLA designs, implements, and supports programs aimed at:

The U.S. Mission in Timor-Leste is committed to providing the justice sector a vibrant and robust RLA program led by David and Domingos Amaral, the Resident Legal Advisor Assistant. He is excited about hosting several training conferences covering topics such as combatting transnational crime, public corruption, gender-based violence, and human trafficking crimes. Please take time this afternoon to talk to David and the rest of the U.S. Embassy team here today so that we can get your ideas on these and other program opportunities.

Again, thank you very much for coming to today’s reception. Please join me in welcoming David, who I would like to invite to the podium to give remarks.