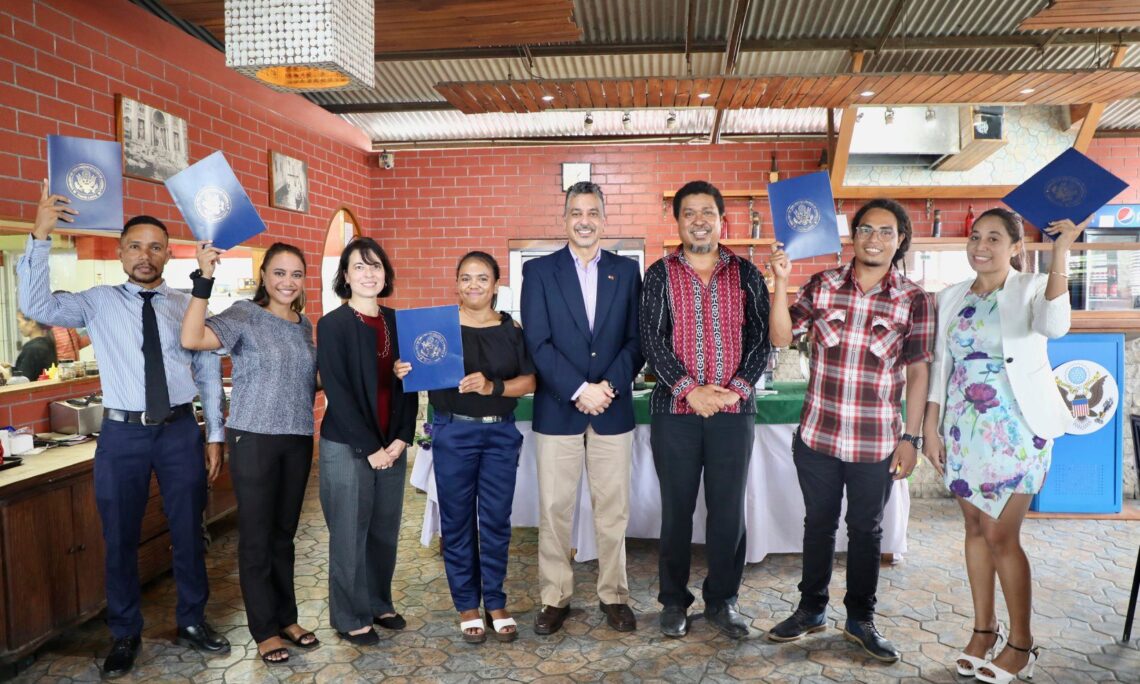 I am glad to be here to honor these graduates, to honor your work, and to honor the memory of Marie Colvin.  Thank you very much for joining me today. These six scholarship recipients were chosen because they are committed to honest, independent journalism, as Marie Colvin was. As you know, Marie Colvin was a war reporter for the London Sunday Times.  In September 1999, Colvin was in Timor-Leste.  During the siege of the UNAMET compound, most foreign journalists chose to leave, but Colvin stayed.  The compound held nearly 2,000 people—and there was only one road out. Her colleagues report that when offered the chance to be evacuated, she shrugged and said, “Forget it, I’m not leaving. This is the biggest story in the world.” Only two other journalists, both women, stayed behind with her: Minka Nijhuis and Irena Cristalis.  Everyone in the compound knew they were in grave danger.

In her reporting from the compound, she described the siege on the camp and the coordinated attacks of the militias and army. Her eye-witness accounts put enormous pressure on the international community. And after four days under siege, the refugees were evacuated. Colvin remembered this later, saying, “I embarrassed the decision-makers and that felt good because it saved lives.”  Xanana Gusmao said, upon Colvin’s death, “Our sister, Marie Colvin, showed great courage in her work and a deep humanity in the face of violence and hatred. We will always remember her willingness to sacrifice her own life to protect those 1,500 Timorese.”

This is why journalism is important.  It gives people the information they need to make good decisions and hold people accountable—which means they can work more effectively for justice and human rights and be better represented by their government. Responsible journalism means that a journalist’s loyalty is to the truth.  A responsible journalist tests information so that the story is as accurate as possible.  You must do the hard work of fact-checking, seeking out multiple sources, and remaining independent from the stories you cover.  Your effectiveness and reliability depends on your accuracy.  That’s why we support this scholarship: we hope that these new English skills will help you check facts, find new sources, and gather a wider variety of information so that your reporting is even more comprehensive.

Free, independent journalism is a pillar of democracy.  The United States is proud to support journalists around the world.  The U.S. Embassy does that here in Timor-Leste with this scholarship, and through our KLABIS journalist roundtables.  We have supported professional training on fact-checking and media literacy for both journalists and citizens.  We also have many programs that focus on English language acquisition and English teaching skills.

To our graduates: We hope that you have been inspired by the bravery and professionalism of Marie Colvin, and that you will use your English skills to make the most of every opportunity to speak truth to power and build your democracy.  I applaud your commitment to a difficult but essential calling as responsible journalists.  Congratulations on your hard work over the past year—I know it isn’t easy to learn another language!

For the others here today: the directors, supervisors, and presidents of media organizations: your work is essential to democracy.  Thank you for supporting your journalists and encouraging them to pursue this opportunity.  We are proud of the work they have done, and grateful for our partnership with you and your organizations.