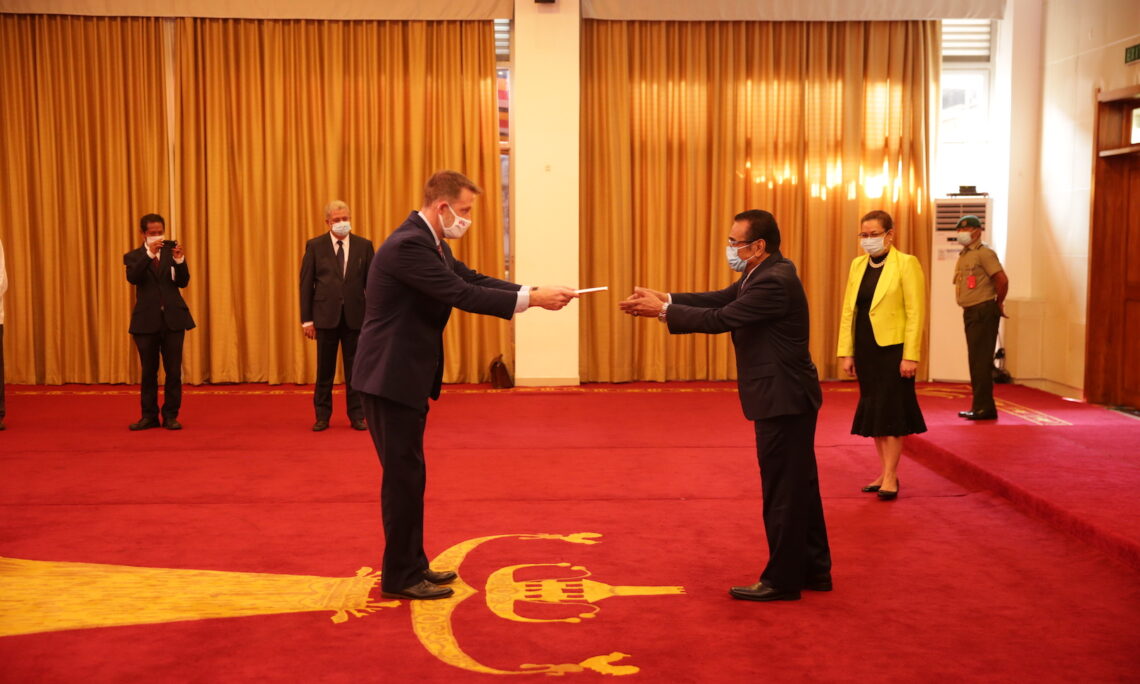 DILI, March 19, 2021 – The new U.S. Ambassador to Timor-Leste, Kevin Blackstone, presented his letter of credential to the President of the Republic of Timor-Leste, Francisco Guterres Lu-Olo on March 19 to officially begin his diplomatic mission.

“It is an honor to present my credential letter from the American President to President Francisco Guterres Lu-Olo. As I shared with the President, it is my sincere privilege to represent the people and government of the United States in this beautiful country.  I am excited to begin my work in support of strengthened relations between our democratic nations.  My priority is to partner with Timor-Leste in support of our shared values and interests, and to offer assistance where we can.   The United States provides a range of support to Timor-Leste through our Embassy, USAID, military, and Peace Corps programs in several areas, including agriculture, education, justice, youth and the environment.  And the United States still has more to offer.  I will focus on working with Timorese counterparts to achieve final agreement on and signing of the Millennium Challenge Corporation Compact, introduce and implement a new, five-year $93 million bilateral agreement with Timor-Leste through USAID, and follow through on our commitment to provide more than $10 million to help rehabilitate the Baucau airfield.” said Ambassador Blackstone.

Ambassador Kevin Blackstone is the sixth U.S. Ambassador assigned to Timor-Leste since the U.S. Diplomatic Mission was established in 2001.

Prior to his assignment to Timor-Leste, Ambassador Blackstone served as Executive Director of the Bureau of East Asian and Pacific Affairs, Minister-Counselor for Management of the United States Embassy in Cairo, Egypt, and Management Counselor of the United States Embassies in Bangkok, Thailand and New Delhi, India. Ambassador Blackstone was Team Leader of the United States Provincial Reconstruction Team in Wasit, Iraq.  Earlier, he has served as a U.S. diplomat in Nigeria, Uganda, Gabon, Italy, Canada, India, and Egypt. He speaks Portuguese, French, Italian and is learning Tetum.