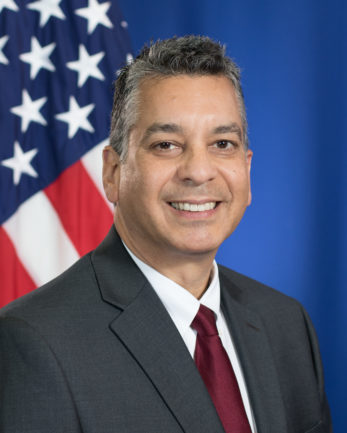 Elias Parra assumed his duties as Deputy Chief of Mission at U.S. Embassy Dili beginning in June, 2019.  His previous overseas assignments have included Jerusalem, Tokyo, Cairo, Brasilia, and Sana’a (YAU Jeddah), where he served as General Services Officer in Management.  He served in the Office of Crisis Management and Strategy in the State Department Operations Center, and in the Regional Support Center in Frankfurt as Training Director for the European Region.

Deputy Chief of Mission Parra has an extensive background in Crisis Management, including the evacuation of Embassy Cairo during the 2011 Arab Spring, as well as Mission Brazil’s Crisis Planning for the FIFA 2014 World Cup.

Elias completed his undergraduate studies in Criminal Justice in Belmont University in Nashville, Tennessee; he earned a Master’s in Business Administration with a concentration in Management from University of Phoenix in Puerto Rico.  Prior to the Foreign Service, he worked throughout the Caribbean as a Catastrophe Specialist for Lloyd’s Underwriters, and with United Parcel Service management in the Caribbean and Mexico.  He is fluent in Spanish and Portuguese.