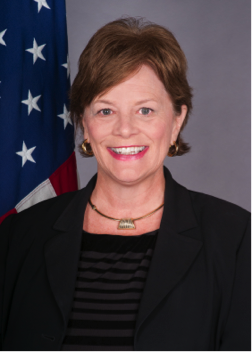 U.S. Ambassador to the
Democratic Republic of Timor-Leste

Kathleen Fitzpatrick, a career member of the Foreign Service, Class of Minister-Counselor, was sworn in as United States Ambassador to the Democratic Republic of Timor-Leste on December 22, 2017.

She previously served as the Principal Deputy Assistant Secretary in the Department of State’s Bureau of Intelligence and Research (INR). Before joining INR, Ambassador Fitzpatrick served as Chief of Staff in the office of the Under Secretary for Civilian Security, Democracy, and Human Rights. Previously, she served as Deputy Assistant Secretary in the Bureau of Democracy, Human Rights and Labor, where she worked on human rights, democracy and international religious freedom issues in the Middle East, Latin America, and East Asia. Ms. Fitzpatrick has held leadership positions in the Department’s Bureau of European and Eurasian Affairs as Director of the Office of Southern European Affairs and as Director of the Office of Nordic and Baltic Affairs. She has served as Political Counselor at U.S. Embassy Madrid, as a Political Officer at U.S. Embassy Moscow and the U.S. Mission to NATO in Brussels, as well as Vice Consul in Antwerp, Belgium. Ms. Fitzpatrick’s other previous positions include Acting Office Director in the Bureau of Political Military Affairs, Political Officer in the Bureau of International Organizations’ Office of United Nations Political Affairs, and Desk Officer in the Department’s Near Eastern Affairs Bureau. She also served in the Executive Secretariat and the State Department’s Operations Center.

Ambassador Fitzpatrick holds an M.A. in Political Science from Georgetown University and a M.S. in National Security Studies from the United States National War College. She has received the Presidential Rank Award, the Department’s 2017 Arnold L. Raphel Award (for leadership, mentoring and professional development of colleagues), and a number of Superior and Meritorious Honor Awards from the Department of State. Her languages include Spanish, Russian, Dutch, French, and some Arabic.