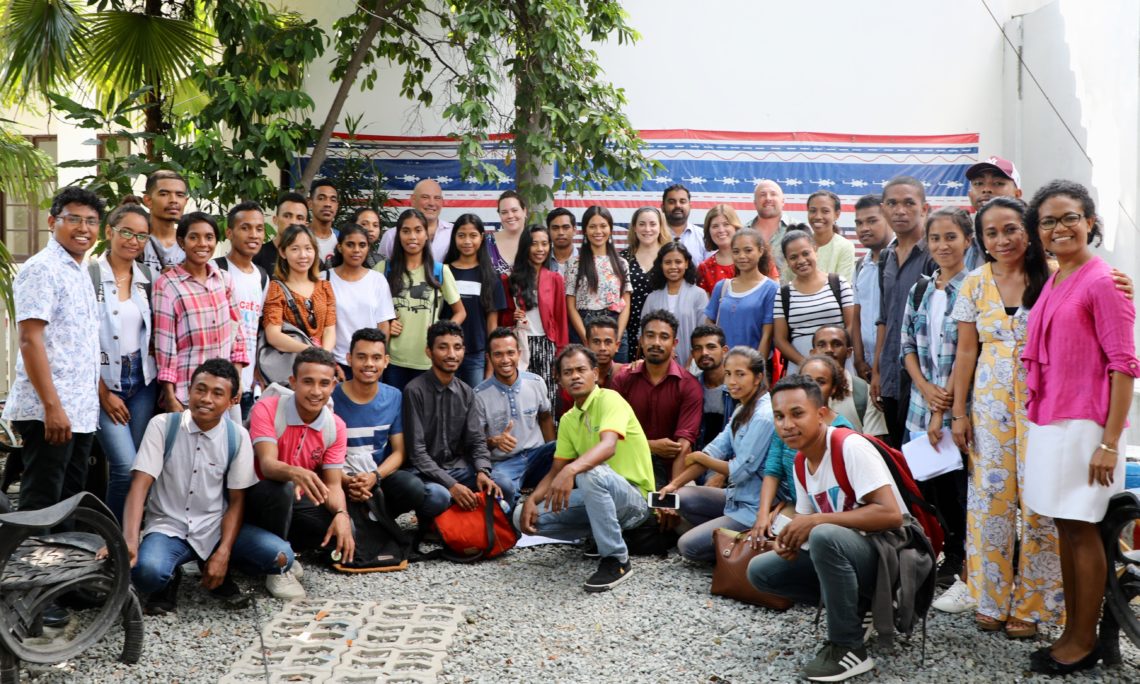 U.S. Ambassador Kathleen M. Fitzpatrick hosted a welcome reception on April 10, 2019 for six American delegates participating in an international political exchange to Timor-Leste organized by the American Council of Young Political Leaders (ACYPL) with support from the U.S. Department of State. The bipartisan delegation will explore politics, governance, and policy making in Timor-Leste from April 8-13. This is the third exchange of political leaders as part of an agreement between ACYPL and the Government of Timor-Leste, who sponsors the exchange. Through this partnership, ACYPL sent its first U.S. delegation to Timor-Leste in March 2017 and welcomed a Timorese delegation to the United States in May 2018.

“This is a diverse group that includes women and men; urban and rural; Republicans, Democrats, and Independents,” noted Ambassador Fitzpatrick. “With their wealth of knowledge and experience, you can see why we are excited to have them here in Timor-Leste.”

Delegates on the exchange include Anne Bailey, South Carolina Organizing Director for the Kamala Harris for President Campaign; the Honorable Stephanie Meyer, President of the Shawnee, Kansas City Council; Amol Naik, Chief Resilience Officer for the Mayor of Atlanta; Bryan Pedersen, ACYPL Trustee; Rick Smotkin, President of the ACYPL Board of Trustees; and Katherine Soares, Vice-Chair of the Board at the Portuguese American Leadership Council of the United States.

The delegation will meet with government officials and business leaders in Dili and visit Atauro Island – home to waters considered to be the most biodiverse in the world – to learn more about environment issues facing Timor-Leste and the region. “ACYPL exchanges give emerging leaders a global perspective,” said ACYPL Chief Executive Officer Libby Rosenbaum. “This group will gain a unique perspective on the history, politics, and culture of Timor-Leste, and most importantly, they will forge professional relationships and friendships that can last a lifetime.”

In June 2018, the United States welcomed Timor-Leste into its signature program for youth leadership development in Southeast Asia – the Young Southeast Asian Leaders Initiative (YSEALI). More than 700 young Timorese leaders have already joined YSEALI and many have been selected to participate in regional workshops as well as fellowship programs in the United States. One of these members is Apolinario dos Santos, the first from Timor-Leste to participate in the YSEALI Professional Fellows Program on Governance and Society in May 2019, which will also be implemented by ACYPL. He will complete a five-week fellowship in Columbia, South Carolina and then participate in the Professional Fellows Congress in Washington, DC.

Founded in 1966, the mission of ACYPL is to give the next generation of elected officials and policy experts a global perspective on the most pressing issues facing the world. Every year, with support from the U.S. Department of State, international partner organizations, and others, ACYPL conducts a variety of exchanges for rising political leaders from across the United States and around the world. It has a network of over 8,500 alumni in 128 countries and territories, and many of these individuals have risen to positions of national and international prominence. More information about ACYPL is available on its website at acypl.org and on its Facebook page. Additional details about YSEALI can be found on at tl.usembassy.gov/education-culture/yseali/ and on the U.S. Embassy Dili Facebook page.