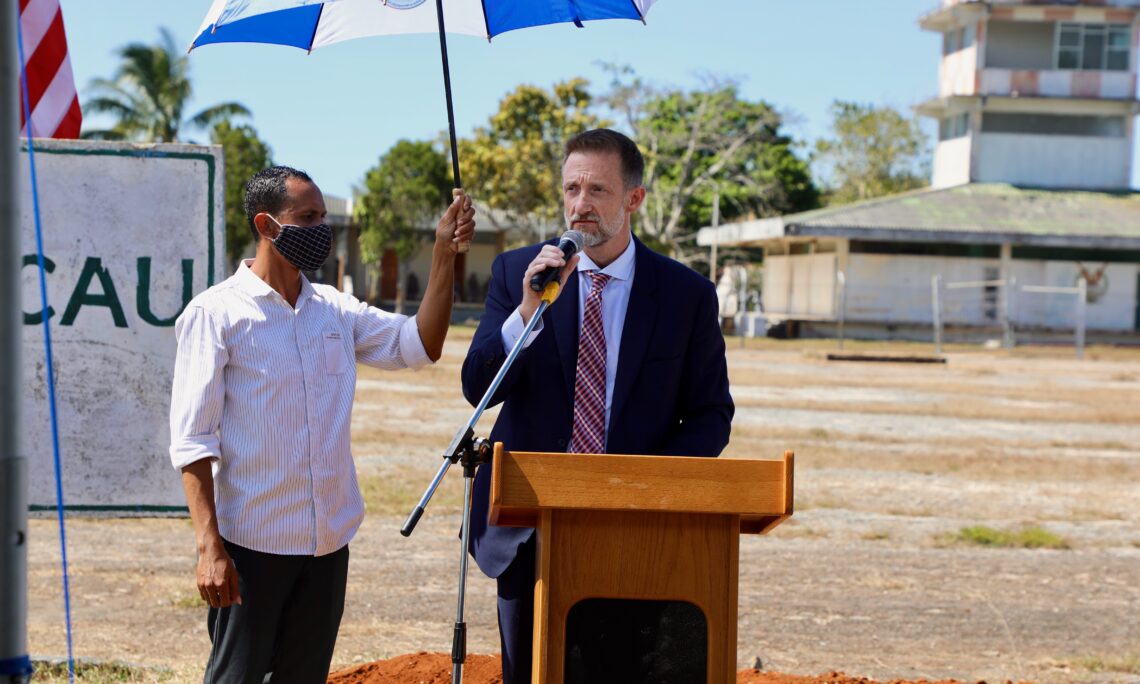 First, I would like to offer my sincere respects to:

I am grateful you have come together to mark the official beginning of our joint rehabilitation of Baucau Airport.

I want to offer my special gratitude to His Excellency the Prime Minister for joining us here in Baucau today.  We are here because of your strong and unwavering support of this project. This project has long been a vision of the Timorese government, especially of His Excellency the Prime Minister, and the United States is proud to partner with you in the areas of security and economic development. I’m glad we are holding this joint groundbreaking ceremony here at this sign. I like this sign.  To me, it’s a simple symbol of Timor-Leste’s sovereignty. The sign – much like the runway –still works, and just needs updating to be fully operational.  The sign makes clear that this airport is operated, now and forever, by Timor-Leste. I have had the opportunity to tour the airfield with members of AACTL in the past, and the potential for expanded use here is clear.  A capable F-FDTL Air Component operating from Baucau will be a major boost to the Government’s ability to monitor and protect Timor-Leste’s sovereignty and economic interests and serve the Timorese people.

In October of this year, a joint team of engineers from the F-FDTL and U.S. military will begin repair of the perimeter fence, and construction of infrastructure projects here at the airfield.  The first will be an equipment warehouse to store airfield support vehicles such as a fuel and fire truck, along with a runway sweeper and other equipment. This equipment will directly support the F-FDTL’s ability to operate and maintain its new Cessna 206 surveillance aircraft arriving at the end of the year, and has the clear potential to support civil aviation here in Baucau as well. These small projects could represent the beginning of additional assistance from the United States.  We have offered to construct a warehouse for humanitarian assistance and disaster relief, as well as to install runway lights that will support 24-hour use of the airfield, and other potential improvements to the airfield. Together, these projects are important first steps in realizing Timor-Leste’s long-held dream of rehabilitating this important airport, expanding the capability of the F-FDTL and civil protection agencies, as well as supporting economic development and diversification in this crucial part of the country.

The ability of the U.S. Government – and people – to support Timor-Leste on this joint rehabilitation is made possible by the Status of Forces Agreement between our two countries.  This Agreement, signed in 2002, makes possible security assistance like this, as we all as joint military exercises, training for F-FDTL personnel, and more than 10 years of service of the U.S. Navy Seabees, whose 102nd project I helped dedicate this morning at the EBC Seical School with the Education Minister.

In closing, I want to offer my sincerest, heartfelt gratitude to His Excellency Prime Minister Taur Matan Ruak; Vice-Prime Minister Jose Dos Reis, Minister Filomeno; Lieutenant General Lere; and civil aviation authorities for your ongoing support of this project.  I look forward to future collaboration between the government and peoples of our two nations.