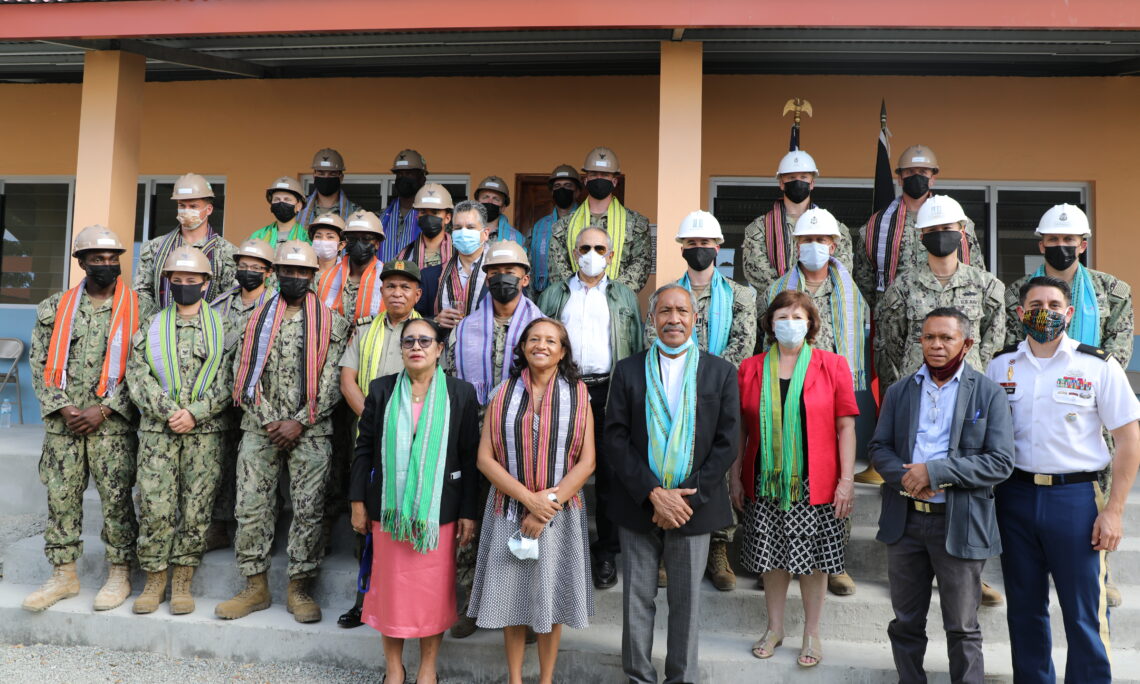 DILI, 23 June 2020 – U.S. Ambassador to Timor-Leste, Kathleen Fitzpatrick, H.E. Ramos Horta, Education Minister Soares, Defense Minister Filomeno, and F-FDTL Chief of Staff Colonel Coliati celebrated the 100th project of the U.S. Navy Seabees in Timor-Leste.  Together, they cut the ribbon on a new 2-room classroom constructed by the Seabees built at the Fatumeta Pre-Secondary School.  The new facility, valued at $163,000, will benefit over 1,300 students of Ensino Basico Central Fatumeta Pre-Secondary School.  The U.S. Navy Seabees have had a continuous presence in Timor-Leste since 2009, rotating groups of American military engineers every six months to improve educational facilities and health clinics.  This is the current Seabees detachment’s third completed project in their deployment, and the Seabee’s 100th project in total.

“It is exciting to announce that the U.S. Navy Seabees have completed their 100th project in just over 10 years of hard work in Timor-Leste.  The American women and men of the Naval Mobile Construction Battalion Five truly put their hearts and souls into this project, working long hours to make sure this school was completed both safely and with excellence.  The U.S. Navy Seabees work is just one of the many ways that the United States supports Timor-Leste, in both good and challenging times.” Ambassador Fitzpatrick said.

The global COVID-19 pandemic extended the current group of Seabees’ deployment and presented unique challenges to be overcome.  In order to reduce personnel at the worksite, the Seabees prefabricated most of the construction on their camp.  During this time period, the Seabees also found time to support the Timor-Leste National Police by building benches to allow officers an opportunity to rest after long shifts of enforcing the State of Emergency.

The current group of U.S. Navy Seabees (Naval Mobile Construction Battalion Five) will depart Timor-Leste soon and be replaced by Seabees Naval Mobile Construction Battalion Three.  The incoming group will immediately start construction of a 3-room school in Baucau with an estimated cost of $350,000.  They will also construct the new security perimeter fence in Baucau Airfield as part of a broader $10 million agreement to co-develop the airfield.